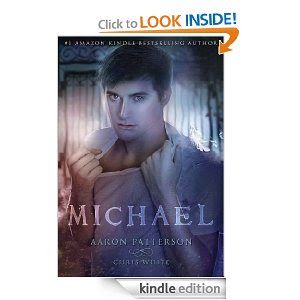 "I was surprised by how much I really, really liked this book. I have not jumped on the whole "fallen angel" bandwagon, just as I didn't jump on all of the vampire stories that came out after Twilight. This is not your typical fallen angel story. It is one that has left me breathlessly waiting for the next one in the series. Hurry up please!!!"
--Sandra Stiles

PRODUCT DESCRIPTION:
Michael did the unthinkable to save Airel from death, but now he must live with the choices he has made--both good and evil. Tortured by his past and haunted by what he believes might be his future, Michael seeks redemption--but will the past prove to be too strong? How can he break free of it and be the man he longs to be for Airel? If only he had never...

Airel. Michael's one true love. He had forced her to drink in new life only to find that old wounds and deep scars do not heal overnight. Can she truly forgive Michael, can she truly love him? And can he accept that forgiveness? Or is it all for nothing, and has he gone too far already? As the darkness of past choices closes in on them, chases them, intercepts them, coming at them from everywhere at once, how can their love possibly survive?

REVIEWS:
"It takes rare talent for a man to write a novel from a male POV and have it published to great critical and commercial acclaim. But it takes a miracle for that same male, or in this case males, to write a novel from the POV of a teenage girl and have it turn out as incredibly as did the new StoneHouse YA by Aaron Patterson and Chris White, AIREL. From the first sentence, I felt compelled to dive into this young woman's story and just as importantly, I felt like I personally knew her, which means I laughed, stressed and cried right along with her. A beautifully written and crafted fiction about teenage innocence, faith, loss and love. A must read for teens and adults alike."
--Vincent Zandri, International Bestselling Author of The Remains, The Innocent, and Concrete Pearl

"I am happy to say that this novel is one of my favorites of its kind. I never thought I could read a novel like this and be so swept away! I am always willing to try new books, but I usually steer clear of this kind of novel. Not anymore! Not when I can be so engrossed into the character's story, like I was with the beautiful AIREL, that before I know, it's over. I kept turning the pages , wanting to, no-NEEDING, to know what was going to happen next."
--Molly Edwards, Willow Spring, NC

Aaron Patterson is the bestselling author of the thrilling hard-boiled Mark Appleton series, (1)SWEET DREAMS, (2)DREAM ON and (3)IN YOUR DREAMS. AIREL is book one in the Airel Saga, followed by MICHAEL book two in the Airel Saga.

EXCERPT:
That's when the storm within started to finally clear up.
We were soaked, our clothes clinging to our bodies.
I pulled back from him. I felt bad; his shirt was covered with rain, with my tears, slobber, and snot. I wiped my nose with my shirt front, revealing part of my stomach as I dabbed at my eyes with it.
He pulled me in close to him again, but not all the way--his eyes were locked on mine, the puffs of our breathing intermingling in the misty aftermath of the storm.
He leaned in, but off to one side, brushing the softest, gentlest kiss against my cheek and then pulling back. "Airel," he said, his voice a husky whisper.

Aaron Patterson is the author of the best-selling WJA series, as well as two Digital Shorts: 19 and The Craigslist Killer. He was home-schooled and grew up in the west. Aaron loved to read as a small child and would often be found behind a book, reading one to three a day on average. This love drove him to want to write, but he never thought he had the talent. He wrote Sweet Dreams, the first book in the WJA series, in 2008. Airel is his first teen series, and plans for more to come are already in the works. He lives in Boise, Idaho with his family, Soleil, Kale and Klayton.


Chris White grew up living on an old San Francisco city bus that was converted to an RV, living in almost every state of the Union. He spent most of childhood learning how to make fast friends, reading books and doing heroic skids on his coaster-brake bike. He spent most of adolescence playing the trumpet and being a total nerd, building lots and lots of plastic models. He tried college for a couple years, but interrupted that with four years of service as an infantryman in the U.S. Marines. He finished college later, but the Marines taught him far more. He met his wife in Idaho and then spent six months in South Africa with her shortly after they were married. He's tried being a truck driver, bicycle mechanic, executive recruiter, drummer in a rock band and call center robot, but he's always, always been a writer--which he only just realized a few years ago. He has two boys and lives with his family in Idaho.
Posted by Chrissy at 2:37 PM

This sounds like such a good book! I will definitely put this on my "To be read" list. Thanks for posting!

This is a very good book, make sure u read Ariel first.