My review of DENIBUS AR by Chris Turner 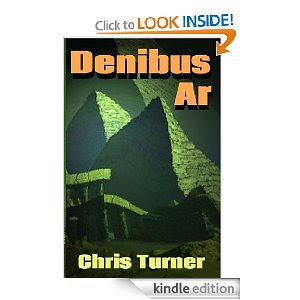 DENIBUS AR by Chris Turner had received 5 stars (the highest possible score) from The Hampton Reviews and totally grabbed my attention. After reading the sample on Amazon, I knew this was my kind of adventure! DENIBUS AR is beautifully written, and the language and descriptions of this fantastic place are magnificent. I was taken in by this author's powerful prose, eloquence, and fluency.

A plane crashes in the white Sahara sand and an American Greek pilot uncovers an amazing discovery that will turn the world upside down when they unearth a towering six-sided pyramid! This rocks the archaeological world because usually pyramids are five-sided, not six.

It takes seven months to move 35,000 tons of earth to uncover the pyramid, and then it was painstakingly excavated for another five months by forty-five dedicated workers. Its one of the world's greatest treasures, but should it be respected and left alone? The Egyptian government loves their priceless gold relics, artifacts, and unspoiled mummies so they get the military involved, sending soldiers (including a crooked captain) to guard the precious find. Thrust into a spooky Indiana Jones setting, (weird things are happening that can't be explained) Carl Langley is an Australian archaeologist who is assigned to the excavation of this amazing archaeological find. The team uses the old fashioned methods, but also incorporates high-tech equipment and intricate technology as they investigate deeper.

Chris Turner is a master story-teller as he brings you right into the scenes. I felt like I was right there when Langley donned his headlamp and descended into the mysterious, dark chambers. The underground world is amazing and breathtaking! And I even got a little spooked when the paranormal vibes started kicking in. Like, just as Langley goes to snap a picture, this carved snake's green eyes turn luminescent. Spooky! And I loved it!

Strange things begin to happen. A bizarre voice echoes in Langley's head, he experiences strange visions, an amulet with faint inscriptions is found, and nobody can explain where a mysterious stray cat came from. I love the mystery with the amulet, especially when a voice commands Langley not to `bag' the weird object, and when he tries to he can't. Instead, he tosses it away, but later, while exploring one of the chambers, he notices small paw prints etched in the dust. Not only is the cat there which is impossible, (love the paranormal element) but upon further exploration, he is shocked to find the amulet has crossed his path again. Déjà vu. So this time Langley keeps the amulet hidden and continues to be mesmerized by it. Does it hold some kind of mystical, Egyptian power...one that seems to possess him? Is there an evil presence lurking around? A prophecy from Koruka (first pharaoh-queen of Egypt) says: my final resting place is hallowed land, sacred beyond belief; it will not be defiled by mortal man. The book makes me wonder if archeologists should tread on sacred land or should the mysteries of the sacred past be left alone? Are people plundering treasures and defiling crypts all in the name of archeology and historical exploration?

The adventure continues and the plot thickens and I don't want to say any more for fear of spoiling it. But I will say this: The author's descriptions and extraordinary knowledge of history from ancient Egyptian history held my interest...and captivated me. I was hooked from the beautiful words, the fantastic descriptions, and the creative plot line. It was different...not the same old stuff. And I loved the ending, especially when I got my answer as to why the pyramid is six-sided!

I also loved the unique and memorable characters Turner created. Especially the mysterious saffron-gold Siamese cat (named Goldie) that hangs around the site! But out of all the characters, I have to say that Langley was my favorite because he was just so cool and I could really connect with his character. He was like my very own `Indy'. And I absolutely adore his love interest, Yisella.

This book is a paranormal trip that sends you into a world of hidden secrets, and into a secret place that has been hidden by time for 5,000 years. The story is interesting, imaginative, and exciting. I'd encourage all readers to come experience this fantastic world of archaeology, adventure, supernatural suspense, forbidden discoveries, and ancient mysteries. You won't be disappointed! This is definitely recommended and five stars without a doubt.
Posted by Chrissy at 8:40 AM

Sounds like a book I would love. Thanks for reviewing it!