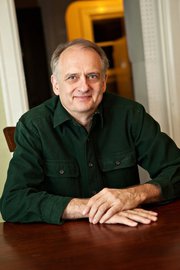 I began writing “Copernicus” during a period of unemployment in 2004. I got re-employed then inherited a construction related business which went under during the recession in 2010. With a lot of free time on my hands again I was able to finish and have accepted for publishing the manuscript for “The Secret Life”.

I’m now working, though greatly under-employed and am hoping that success with “The Secret Life” will allow me to quit my day job and finish a sequel that I have begun as well as several others in a series about “Copernicus”.

Lorin Barber has an MBA from the University of Washington and a bachelor’s degree in Japanese Language. He has had a successful career in Manufacturing Management, travelled the world in business assignments and run his own company. He has six children and so far eight grandchildren. He lives in a small town outside of Seattle with his wife of 38 years. In his spare time you might find him panning for gold in the wilds of Washington State.

***
Click on book to be taken to the Amazon link: 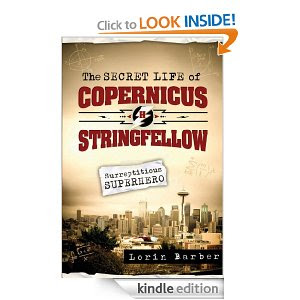 “The Secret Life of Copernicus H. Stringfellow” is the story of a brain so powerful it can stop a speeding vehicle or heal internal bleeding.

“Orphaned at the age of two when his father shot his mother, Copernicus H. (Nick) Stringfellow is a genius of unprecedented capacities. Educated in Medicine, Engineering and almost every other scholarly discipline at America’s leading Universities, Nick goes quietly about the country performing miraculous feats. He devotes his life to saving others and combating evil while striving to remain conspicuously anonymous.”
Barber’s novel brings Copernicus to Seattle where opportunities for changing lives, including his own are abundant. He makes family of friends and friends of acquaintances as all learn that when it comes to his activities you “just don’t ask”.

“As the story unfolds Nick is held at gunpoint by a grungy teenage hitchhiker he has picked up. Nonchalantly letting his mind wander to happier hitchhiking adventures Nick is threatened with death by the greasy youth. As the trigger is pulled the kid finds himself shot in the leg and the weapon moved to Nick’s hand. Expelled from the car with his wound healing, a $100 bill in hand and an admonition to “never use a gun again” the adolescent sees Nick calmly drive away leaving him a lonely walk back to civilization.

In his disguise as a ‘Nurse at Large’ Nick enters the society of Harborview Hospital in Seattle. The mini civilization of the Institution includes patients to be healed, coworkers to elevate and protect, and arrogant doctors to be put in their place. Nick embarks on his errand using telekinesis, mental marvels and common sense, all the while munching on the Twinkies that seem to impart supernatural skills to his already impressive intellect.


Hello Lorin. Welcome to The Purple Brick Road. What are your 5 favorite movies and why?

The Music Man
Support your local Sheriff
The Princess Bride
What about Bob?
Dave
Why: Because they all make me feel good.

Those are all great movies. And I've watched What about Bob? a million times. It's so funny! If you could have been told one thing that you weren’t told when you were a teenager what would you like to have heard?

I don’t think I heard one thing I was told as a teenager.


Love your answer!!! What are your favorite hobbies?

Those sound like great hobbies. Would you eat vegetables on a veggie table?

I always go for cauliflower and broccoli with Ranch.

If you could go to the past or future, where would you stay and why?


I would love to be in Philadelphia with the founding fathers.

When I was about 12 my uncle had a huge house with 3 stories and a basement. We had Christmas with 48 relatives and 7 dogs.


It was a night and day never to be forgotten.

Mmmm.  I can eat it anytime too. What's your favorite dessert?

Who is your best friend? Tell us about him/her.

My best friend is a guy my age with whom I share common philosophies, favorite sports and pastimes, hobbies etc. The only thing we disagree on is whether Beethoven’s best symphony is the 6th or the 9th. We almost came to blows over that one.

Tell us something nobody knows about you.

Then someone would know.
The furthest I have traveled was to:
Once I flew from Seattle to Frankfurt, spent a couple of days, then from Frankfurt to Tokyo for a few more and returned home to Seattle, going around the world in a week. I’ve been fortunate to have visited 45 states and 19 countries.

That's fantastic and sounds like a lot of fun. What childish thing do you still do as an adult?

I say my prayers before I go to bed.

What was the first live concert you ever attended?
John Denver.

Do you think people should eat the fish they catch or just let them go?

If you don’t eat what you catch, all you are doing is annoying the fish. I don’t like to eat fish so I don’t catch them.


What is your favorite TV show and why?

The Mentalist, I wish I could afford to be brutally honest like he is. I don’t think its right to be that way, but it sure is funny.

I enjoy that show too. What a "FUN" interview! Thanks, Lorin, for visiting "FUN" Interviews on The Purple Brick Road. It was a pleasure to have you. And a big thank you to everyone who tuned in.

It is also available through many retail book outlets.

What a great interview, Chrissy. Hi Lorin. Your book sounds like a great read! I also loved the movie Bob and Dave, and I adore John Denver. Gosh! You got to go to one of his concerts, you lucky devil. Wish I could have. I was devastated when he died. My husband like him too and we often play his music.

Oh, I forgot to go to your blog. Hope you come and join mine too.